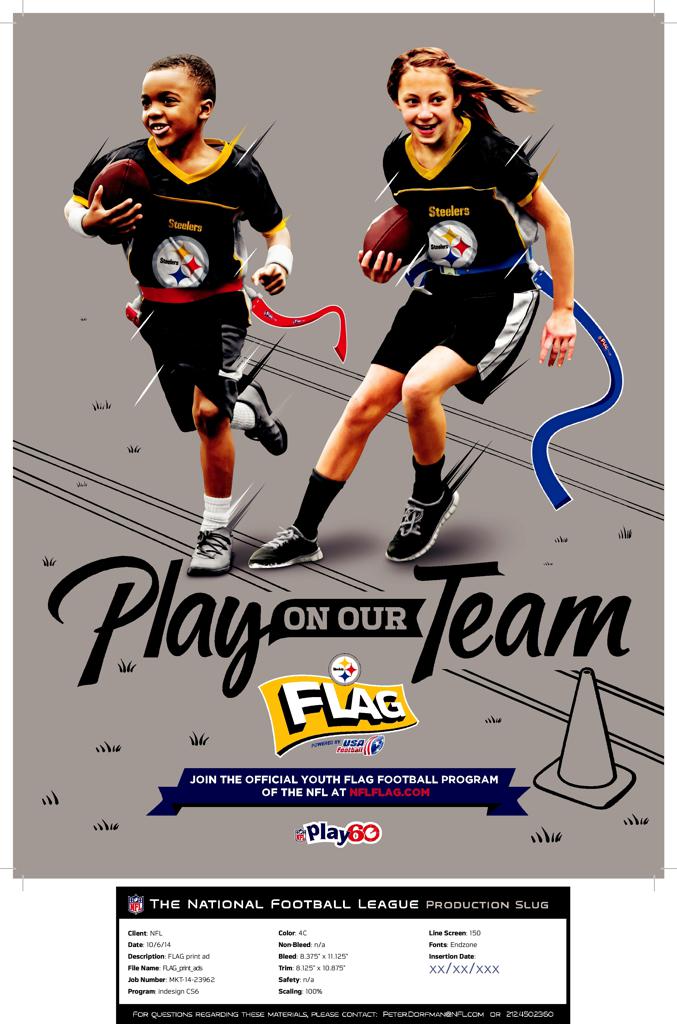 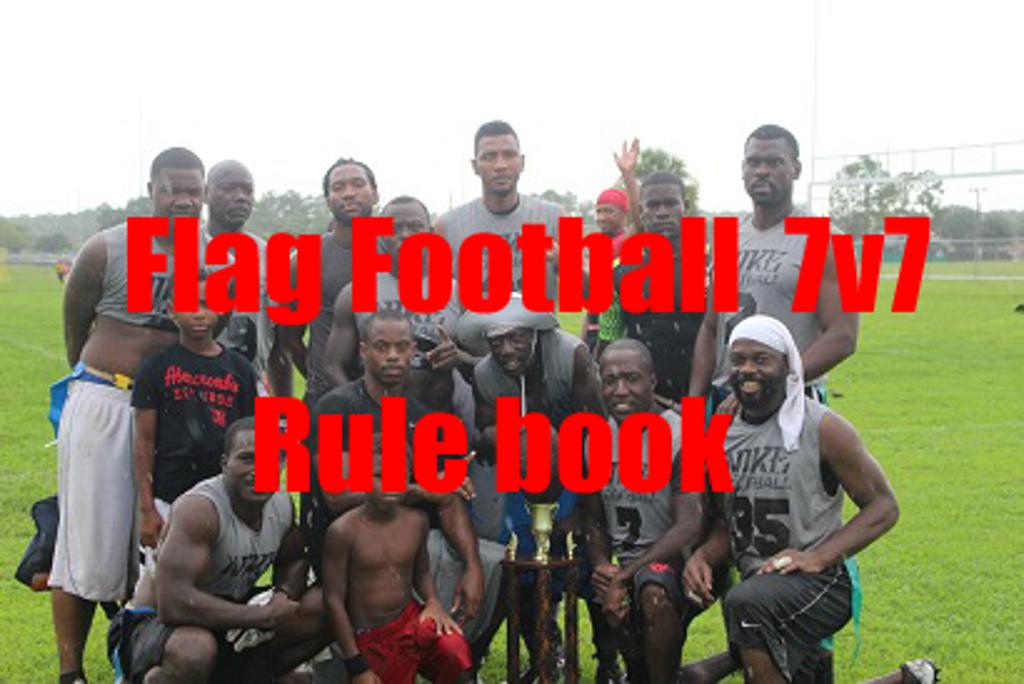 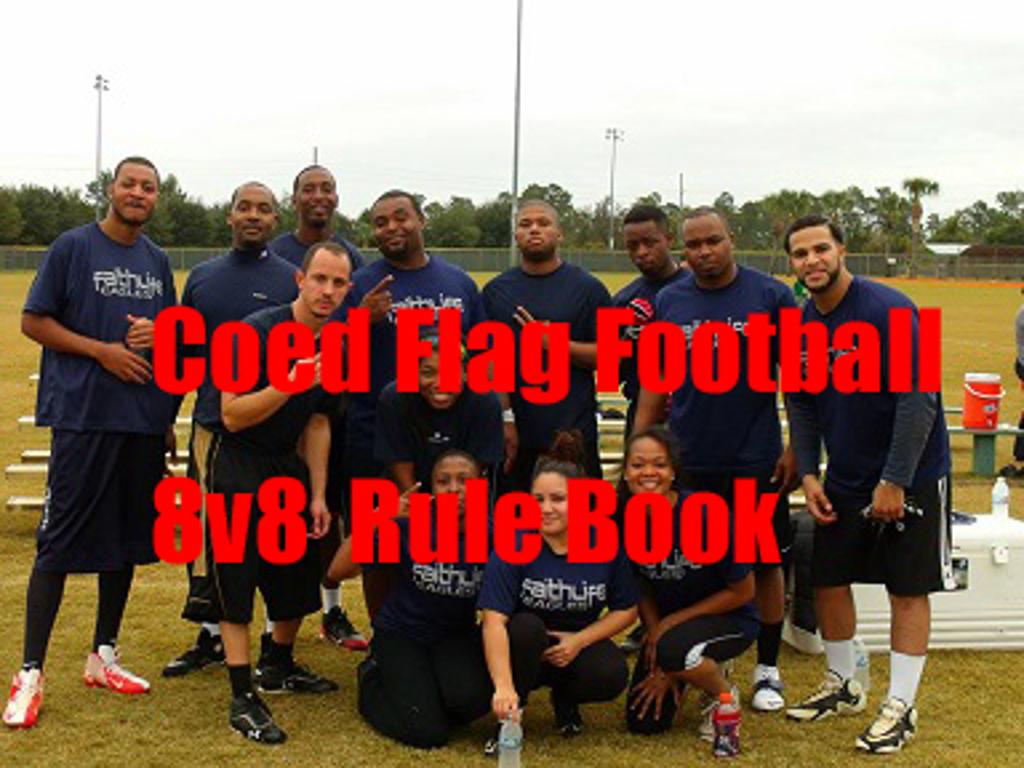 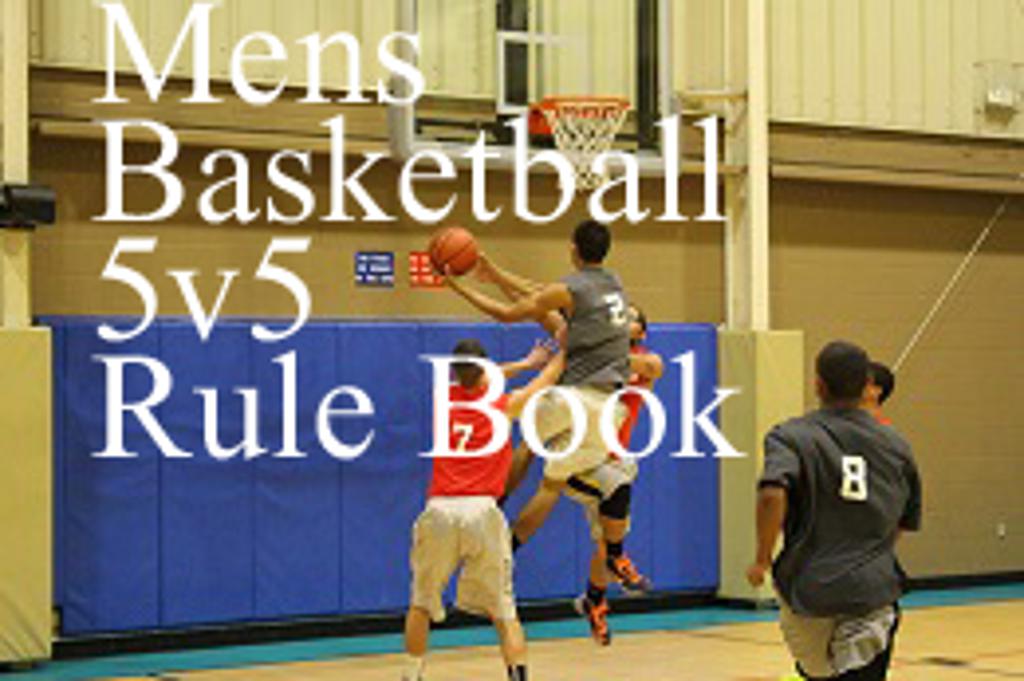 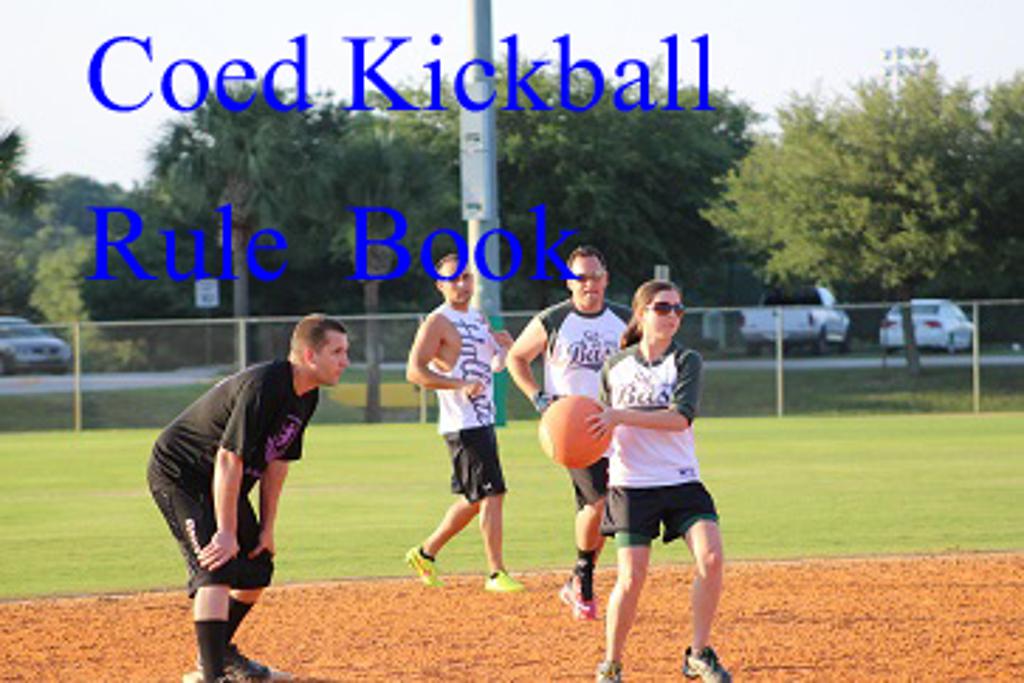 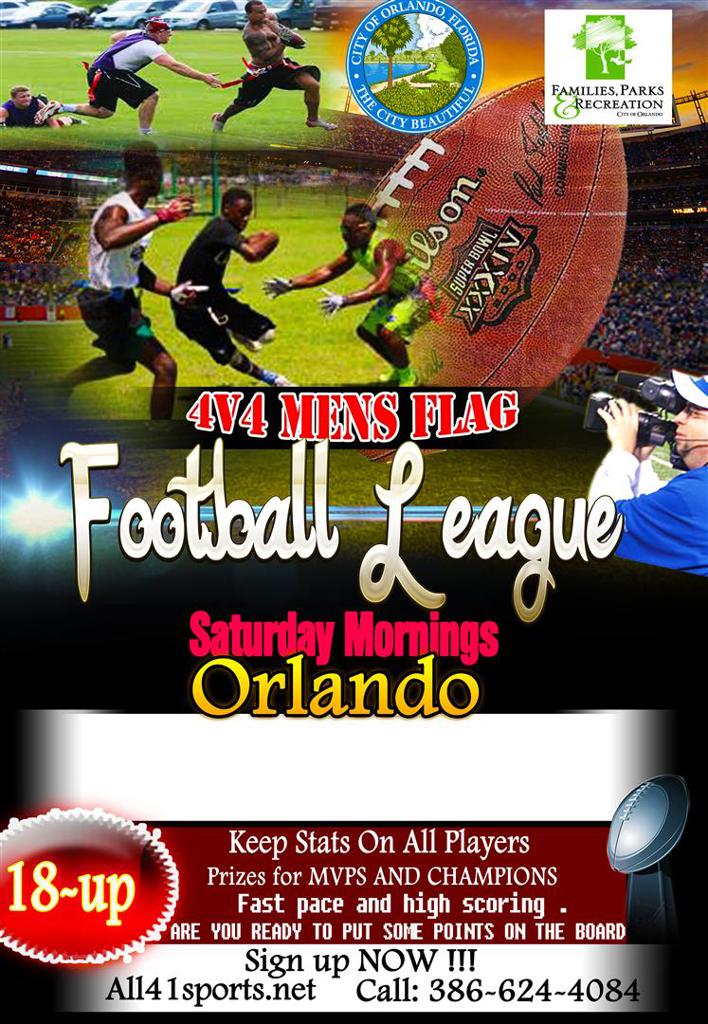 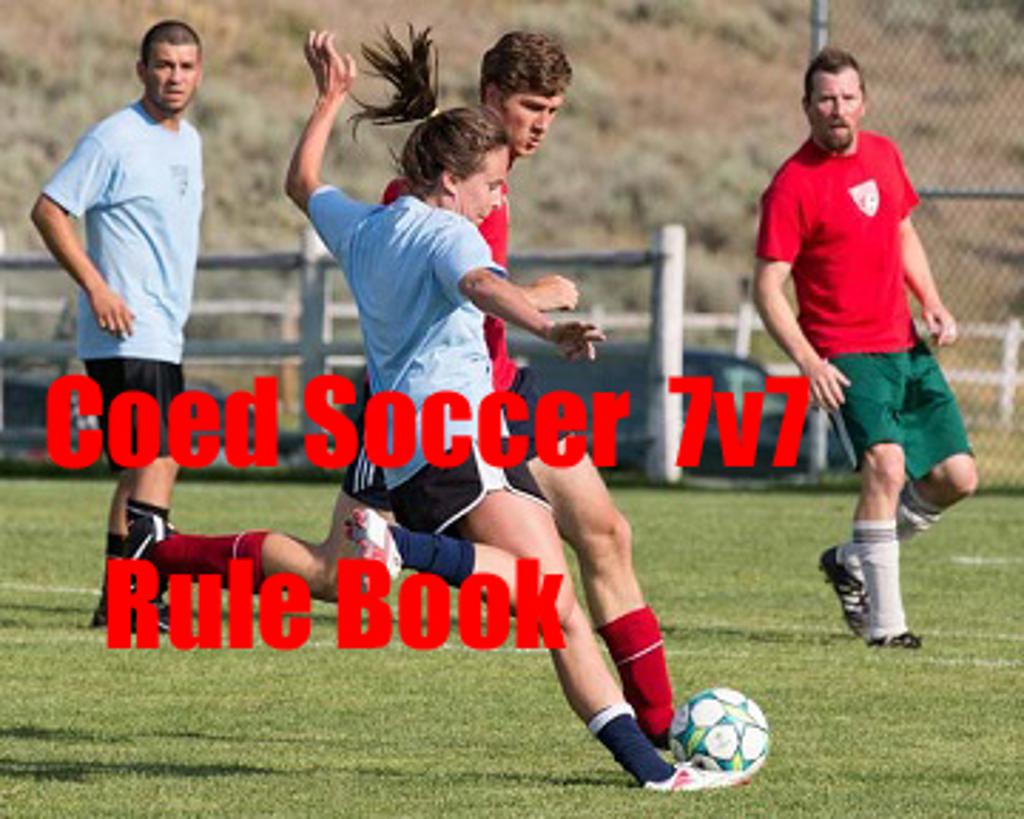 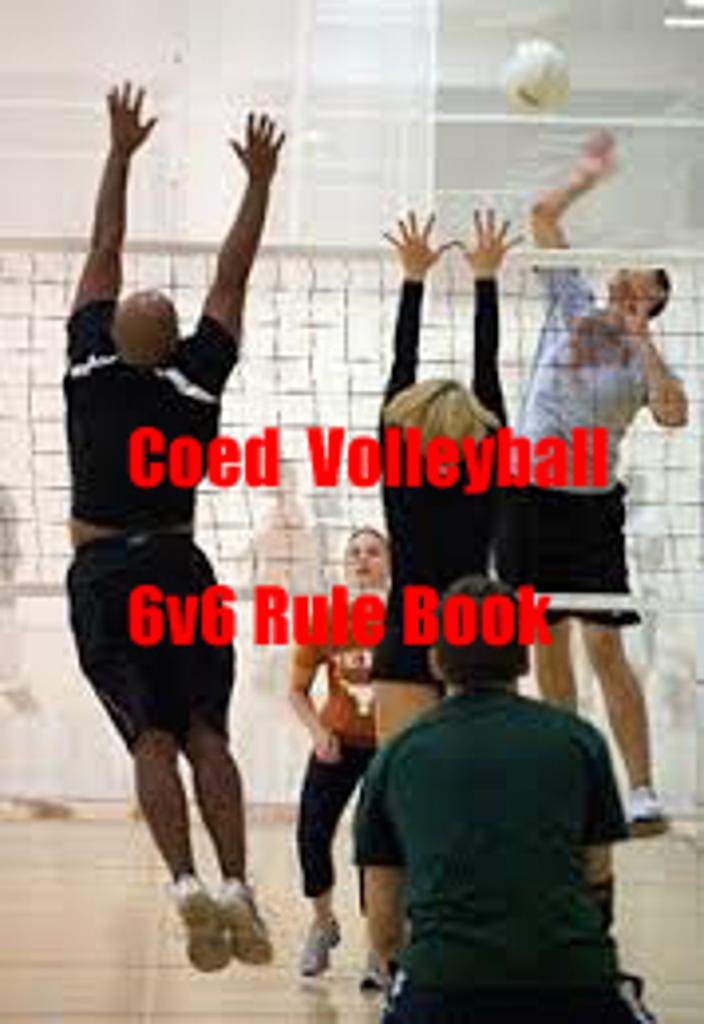 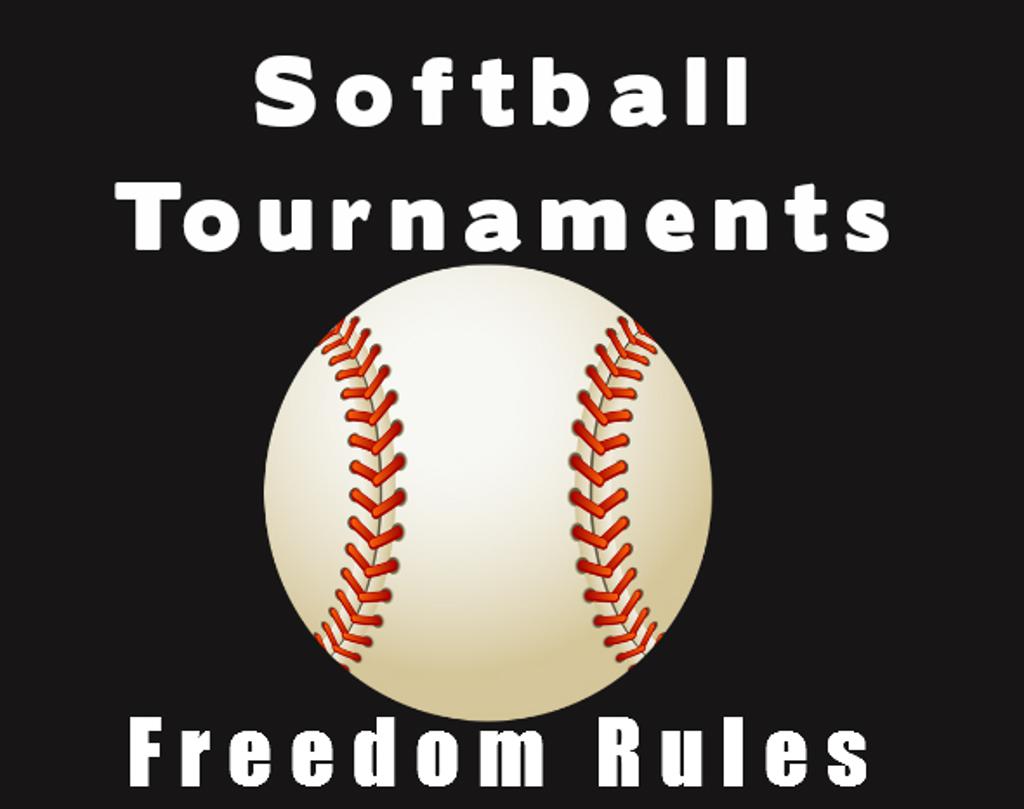 Minimum 2 players to start a game.

A coin toss determines 1st possession. The team can elect to have offense, defense, defer or direction. Choice in the 2nd half will be awarded to the team that did not have the choice 1st half. The offensive team takes possession of the ball at their 5-yard line and has three plays to cross mid-field.  Once a team crosses mid-field they have three plays to score.  If the offensive team fails to cross mid-field, the ball changes possession. If the offense does not score, the ball changes possession. All drives start from the 5-yard line with the exception of an interception.

Each half is 15 minutes long and a 1 minute halftime. If games are behind, it’s at the discretion of the referee to skip the half, as long as both teams agree.

Each time the ball is spotted the offense has 20 seconds to snap the ball (Officials will warn the offense when there is 10 seconds left to snap the ball). Teams must wait until the referees are set prior to the play or a referee acknowledges they are prepared to start the play. All dead ball penalties in the last minute of the game/2nd half are loss of down and stops the clock. Tournament clock is 25 minutes long. Two 15 minute halves and 1-minute halftime. One minute warning will occur in the 2nd half only and a PRO CLOCK will be initiated (if the score is within 2 scores) to stop the clock on incomplete passes, out of bounds, offensive penalties, scoring plays, and change of possessions. Lateraling or fumbling the ball backwards or out of bounds will NOT stop the clock.

Each team has two 30 second timeouts PER GAME. If a time out is called after a TD the clock will not run until the change of possession and the offense snaps their ball.

Players that rush the quarterback must be a minimum of 7 yards from the line of scrimmage when the ball is snapped. The 7 yards will be measured off by a referee.

Players that are not 7 yards from the line of scrimmage when the ball is snapped may not enter into the backfield until there is a change of possession. The official will designate 7 yards from the line of scrimmage. The rusher is allowed a direct lane to the quarterback as long as he or she rushes from either side of the center or outside the bunch formation. The offense must avoid interfering with the rusher if he or she has established a lane.

The quarterback may not run unless the ball has been thrown back, handed or pitched to him or her in the backfield.

Teams may handoff (unlimited), pitch, or throw back in the backfield.  The player who receives the pitch or handoff may throw the ball as long as he or she is not beyond the line of scrimmage (any part of the body). Pitching (backwards) is allowed downfield (unlimited). Handoffs are allowed in front or behind. A handoff DOES NOT count as a lateral/throwback.

A forward pass DOES NOT have to cross the LOS to be a legal play.

If the ball is placed on the “Back” of ANY player, the player MUST run the ball (no give and go to the QB on the back)

Ball is spotted where the flag is pulled. The lead flag must break the plane of the midfield or goal line to be considered a first down or touchdown. The ball doesn’t have to cross.

Players may NOT block down field in any form.

Jumping is allowed as long as it does not cause any contact.

The quarterback has 5 seconds to pass the ball if there is no rush. If the ball is not thrown, then the play is dead. After the ball is ruled dead it is returned to the line of scrimmage. Once the ball is handed off or pitched backwards the 5 second count stops. If the defensive team rushes, then there is no 5 second count. There is no arm in motion, if the ball is in hand when the quarterback’s flag is pulled then it will be ruled a sack. Interceptions may be returned. The rusher may not have any contact with the QB (no hitting the QB arm or knocking the ball out of the QB hand). No part of the body can cross the line of scrimmage.

All players are eligible to receive a pass, including the quarterback, if the ball has been pitched or handed off in the backfield. Players must have at least one foot in bounds when making catch. Players that run out of bounds during a play cannot be the first player to touch a ball when attempting to make a catch. If the player is pushed out of bounds by a defender, then comes back into the play, he or she is still eligible to touch the ball first.

Play is Ruled Dead When

If a player loses a flag unintentionally or starts a play with 1 flag on and receives the ball, the defense only has to touch the ball carrier, not pull the flag.

QB and center must start with both flags on or the play is ruled dead on the snap.

* Note the officials will determine incidental contact which may result from normal run of play.

Roughing the quarterback- the rusher may not knock the ball out of the quarterback’s hand (unless rusher is attempting to pull QB’s flag while the QB has the ball in front of the flag) or bump into them.

Excessive contact even if the defender is making a play on the ball will be enforced. If the official feels it was intentional or with intent to harm the player will be ejected from the game and may be removed from the tournament and a personal foul/unsportsmanlike conduct 15 yard penalty will be assessed.

All defensive penalties are five yards from the line of scrimmage and automatic first down with the exception of holding is a spot foul plus 5, and pass interference-15 yards from the LOS.

Pre-Snap Penalties are not a loss of down. Illegal motion /False Start/ delay of game/ illegal equipment violation – the QB and Center may not start a play without flags.

Impeding the rush (the offensive players must avoid the rusher).

Flag Guarding (players must avoid the defender if they are set).

Blocking- no blocking is permitted.

Excessive contact if the official feels it was intentional or with intent to harm the player will be ejected from the game.

All offensive penalties are 5 yards from the line of scrimmage and loss of down except flag guarding and illegal forward pass which are a spot foul and minus 5 yards and the pre-snap penalties mentioned above. All personal foul/unsportsmanlike conduct penalties will be 15 yards.

RULES for inside 2 minutes of BOTH halves.

Trash talking will not be tolerated. The officials have the right to determine language that is offensive. (Trash talking is language that may be considered offensive to the official, opposing team or spectators). The official may eject players from the game for trash talking. *Cursing is not permitted* and will receive a 15-yard penalty. Each team will receive 1 warning for cursing before penalties will be initiated. A player that receives 2 cursing penalties will be ejected from the game.

If the official witnesses any act of tackling, elbowing, cheap shots, or any other unsportsmanlike act then the game will be stopped. The player(s) will be ejected from the game and that players ability to play the remainder of the tournament will be determined by the tournament director. Only the team captain(s) may address the officials in regard to the rules and calls. (Captains must call a timeout to challenge a call or rule).

We will also not tolerate any unsportsmanlike words or actions from spectators. It will be at the tournament director and official’s discretion of removal of the spectator. If the spectator or spectators are asked to leave and refuse, we will then disqualify the team they are associated with.  We want to maintain a family type atmosphere.

A coin flip determines first possession. Each team has one possession in overtime. They may elect to go for one or two points. If score is still tied both teams will have one play from the 5-yard line to gain as much yardage as possible. Team with the most yardage will win. An additional coin toss determines who goes first.

Teams also must have the same color shirts and have an alternative color (one dark color/one light color). They do not have to be official uniforms. If both teams are wearing the same color, there will be a coin toss, and the losing team will need to change into a different color.

Teams must have Sonic Flag-a-Tag flags (if custom flags are worn they must be of equal dimensions as Sonic flags). NFL Youth flags are allowed. Flags will not be allowed that have been altered (cut, taped, etc.). Mushroom Flags are allowed. The flags cannot be the same color as a player’s shorts.Mouth guards are optional, but strongly encouraged.